THE GUARDIAN RECCOMENDS NAPLES FOR YOUR WINTER HOLIDAYS!

It seems the britsh newspaper "the guardian" is really crazy about Naples!

A new article was writen  by the reporter Nicky Shallow which in recomand Naples for the winter season!

Here is what he says in its journal :

" As fascinating as it is contradictory, ravishingly beautiful yet dilapidated and chaotic, Naples makes a brilliant winter break destination. It enjoys a mild, southern climate and a matchless natural setting on a wide azure bay, with the brooding bulk of Vesuvius, the Sorrentine peninsula and Capri on the horizon. World-class monuments, some of the best food in Italy, a vibrant street life and a thriving contemporary art scene increase its appeal and, in the period leading up to Christmas, the city is at its most extrovert. Still central to any Neapolitan natale (along with the food, such as Christmas rococo cakes) is the centuries-old tradition of the presepe, or nativity crib, which sees crowds elbowing their way along the Spaccanapoli (the arrow-straight road that splits the ancient centro storico in two) en route to narrow Via San Gregorio Armeno to stock up on tiny figurines, some with moving parts, for their home cribs.

Italy’s third-largest city is looking better than it has in a long time. The piles of rubbish are gone, and traffic has been banned from much of the Lungomare (seafront) and large swathes of the centre. The completion of the metro system is in sight and the remodelling of the Piazza Garibaldi and Piazza Municipio areas, that has brought traffic to a near standstill in recent years, is almost finished. Moreover, private initiatives are seeing crumbling monuments spruced up, gardens tended and long-closed sights, such as the Cimitero delle Fontanelle and the church of Santa Maria del Purgatorio ad Arco, opening to visitors once again. Naples has often been dubbed Italy’s most underrated city, but that is changing. Tourist numbers are on the rise, so get there soon.

What to see and do


Many of Naples’ treasures are below street level, not least some of the most impressive metro stations in the world. The first “art station” opened in 2001, but the ambitious idea for a public art project in the underground system dates from the late 1980s. The 11 stazioni to date have involved both emerging local artists and architects and major international names. The most recent openings are Oscar Tusquets Blanca’s 2013 Toledo stop, with its eye-popping escalator descent under the towering Crater de Luz mosaic, and Karim Rashid’s 2011 Università, a joyous riot of youthful bubble-gum colours, psychedelic designs and mirrors. Municipio, inaugurated in June, is a work-in-progress: completion has been delayed by the discovery of Roman remains (including several ships) on the site.
• anm.it, 90-minute metro ticket €1.50; all the art stations are on Line 1; start at Garibaldi and head towards Piscinola


Rione Sanità
A Miglio Sacro (Holy Mile) walking tour of the earthy, densely populated Sanità district (so-named because of its “healthy” location outside the city walls) offers an insider’s take on one of Naples’ most evocative neighbourhoods. The company also offers tours, enthusiastically led (also in English) by young locals, taking in hidden gems, such as the early Christian catacombs of San Gennaro and San Gaudioso, Ferdinando Sanfelice’s magnificent Palazzo dello Spagnolo with its “flying staircase”, and the vast Cimitero delle Fontanelle, a mass burial ground that holds the bones of an estimated 40,000 people, many of them victims of the 1656 plague. En route, you’ll pass narrow lanes crisscrossed with washing lines, lively street markets and glorious but dilapidated palaces and will come away with a sense of having seen something a bit different. 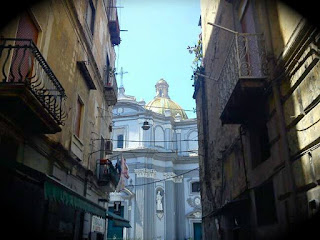 If you only visit one museum in Naples, make it this. The Farnese family’s peerless haul of ancient Greco-Roman art and artefacts forms the core of the collections, which are housed in a vast, 17th-century former university building. The labelling is almost non-existent and the lighting is poor, but nothing can detract from showstoppers such as the colossal Farnese Bull, the pumping-iron Hercules and the pair of powerful tyrant killers – all Roman copies of early Greek sculptures. Of the collections on the upper floors, best are the exquisite mosaics from Pompeii and Herculaneum and the saucy ancient erotica in the Gabinetto Segreto, plus the bronzes from Villa dei Papiri in Herculaneum, among which the five female dancers and pair of lean athletes, poised for flight, are standouts.
closed Tues, €8, free for under-18s and on the first Sunday of each month

Mercato di Porta Nolana For a taste of Neapolitan street theatre in the raw, leave your valuables at home and head to the sprawling, chaotic Porta Nolana market, which takes place daily around this 15th-century gateway. Although you can buy anything here from pirated DVDs and computer software to fake Prada bags and multipacks of socks, locals come to haggle over some of the best and freshest fish and seafood in Italy. Against briny smells of the sea and the incomprehensible bellowing of the vendors, stall after laden stall offers every kind of sea creature imaginable: shiny eels, squirting clams, fat prawns, vast hunks of swordfish, leathery strips of salt cod and inky, slithery squid.
OplontisThe little-visited archaeological site of Oplontis, on the coast 30km south of Naples, is usually passed up in favour of Pompeii and Herculaneum, although they were all buried in the same 79AD volcanic eruption. Now 10 metres below street level in the modern suburb of Torre Annunziata, the massive villa complex is believed to have belonged to Nero’s second wife, Sabina Poppaea, she of the baths of ass’s milk. The villa is notable for the second-Pompeiian-style wall paintings that still decorate the once-sumptuous rooms.
• Take the Circumvesuviana train from Naples to Torre Annunziata, open daily, €5.50 including nearby Stabiae and Boscoreale

Trailblazing chef Mario Avallone pioneered contemporary Neapolitan cuisine in the mid-1990s with his first, tiny, Stanza del Gusto. Passionate about local, properly sourced ingredients, he now works in a colourful, two-level space near Piazza Bellini, where the menu showcases the best the region has to offer. Pop into the ground-floor wine bar for a platter of local cheeses, a pane cunzato (a kind of open sandwich, from €6) or the two-course menu lavoro (€13 with wine, coffee and water), or settle in for a more relaxed meal upstairs, maybe salt cod tempura with papaccelle (baby peppers) or lamb tagine (mains from €14).
• Via Costantinopoli 100, , lastanzadelgusto.com, closed Sun eve 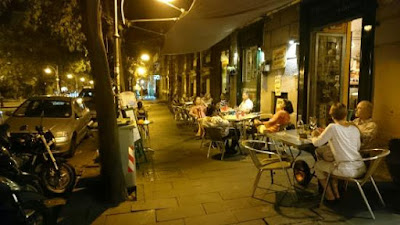 Friggitoria Vomero
One good reason to take the trundling funicular railway up to the leafy Vomero district is to visit the Certosa di San Martino monastery complex. The other is the Acunzo family’s old-fashioned “frying shop”, just opposite Piazza Fuga station. Bite-sized, deep-fried goodies that come crackling fresh from vats of sizzling oil from 11am include zeppole (small doughnuts), lightly-battered vegetables, panzerotti (fried savoury turnovers stuffed with tomato and cheese) and arancini. At 20 cents each, you can afford to try them all.
• Via Cimarosa 44, closed Sun

Trattoria Castel dell’Ovo
Borgo Marinari, the old fishermen’s quarter at the base of the Castel dell’Ovo island fortress, is a pretty spot for a meal, but most of the restaurants here are overpriced and underwhelming. Not so no-frills Trattoria dell’Ovo, where fresh fish and seafood goes into dishes such as spaghetti alle vongole (€10) or braised purpetielli (baby octopus, €9), golden-fried anchovies (€5.50) and grilled calamari (€10). A jug of the chilled house white (€3 for half a litre) washes it all down nicely, and you can sit and eat on the quayside. 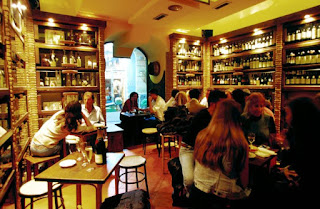 Ba-bar
A laid-back, cafe/bistro/bar hybrid with a candlelit, French vintage-look interior, Ba-bar is in the upmarket Chiaia neighbourhood and is a pleasant place for morning coffee or lunch. Things liven up at aperitivo time, when great cocktails are accompanied by nibbles from the bar and soft, jazzy sounds that crank up as the evening progresses. The basement kitchen turns out salads (from €8) burgers, carpaccio and pasta dishes, and there are board games and books, plus a big screen for sports events should conversation falter. " 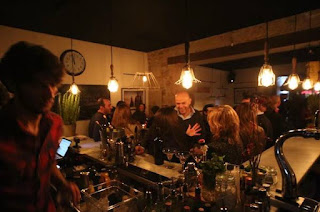 Campania I love you

FALL IN LOVE WITH NAPOLI